Narayana Swamy, is a very big and powerful industrialist, who resides with his family of three sons and their respective wives and children. Narayan Swamy and his wife Laxmi stay with Mohan the eldest son, Rajendran the second son and Radhakrishnan the youngest of the three sons. The story revolves around Laxmi and her three daughters-in-law and her grand daughter in law Thulasi, who is also the main protagonist of the serial. Rajeshwari, the eldest daughter-in-law is cunning and scheming by nature and always takes advantage of time and situations by virtue of being the eldest. Chitra, the second daughter-in-law is a very diplomatic lady with a sweet tongue though as scheming as the first daughter-in-law. Her affinity to films helps her lace her acid comments in a more humorous fashion. Gayathri the third daughter-in-law is an expert in Bharat Natyam and also a fitness freak. By virtue of being the youngest she is forced to tag along with the elder daughter-in-laws. Though there are frictions between the three daughter-in-laws, they inevitably always stand together to fight against the common enemy, whom they perceive to be Laxmi. The story takes a drastic and swift turn when Vijay, the eldest grand son of the family and the darling of the entire household goes against the families wishes and marries Thulasi, who happens to be the daughter of the family priest. Thulasi is ill treated by her mother-in-law, Rajeshwari along with Chitra and Gayathri. After bearing the brunt for a long time, Thulasi decides to retaliate and make her mother-in-law and along with Chitra and Gayathri realize that they too are daughter-in-laws of the family. Thus the title, which is apt and in sync with the story line, moves at a hectic pace and keeps the viewer engrossed with the on goings in the Narayana Swamy household. 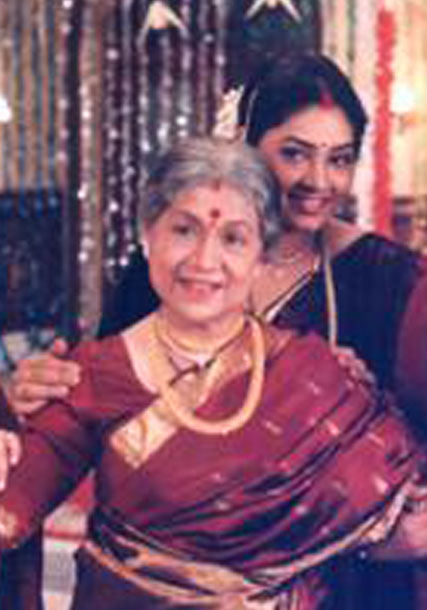